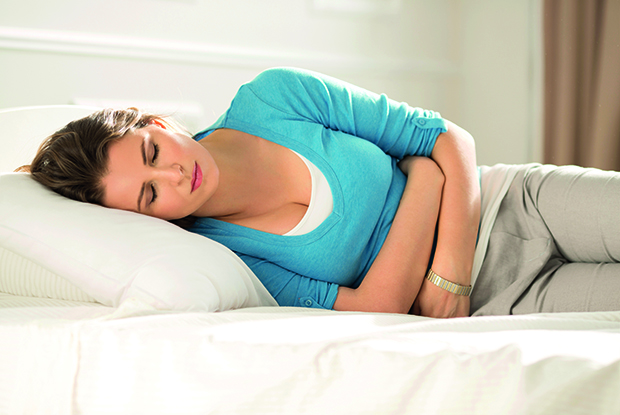 Menorrhagia is a condition in which a woman has heavy or prolonged periods during her regular monthly cycle. Such heavy menstrual bleeding can be inconvenient and uncomfortable, but it may also signal a more serious health problem.

Contrary to what many think, each woman's menstrual cycle has its own unique timing and variation. While the average period occurs every 28 days and lasts for four days, fluctuations between 21 and 32 days are considered normal. Soaking through a sanitary pad or tampon every two to three hours is considered a heavy period. Likewise, prolonged periods are those that last for more than seven days.

A number of underlying issues can cause heavy menstrual bleeding, such as uterine fibroids, noncancerous tissues that grow in and around the uterine wall, explains Steven R. Goldstein, MD, obstetrician and gynecologist at the New York University Langone Medical Center and professor of obstetrics and gynecology at New York University School of Medicine. If you're dealing with menorrhagia, your doctor will need to rule out fibroids as a first step.

Other conditions that can cause heavy menstrual bleeding include:

Anovulation, or the ovaries' failure to produce or release mature eggs
Polyps on the endometrium, the inner lining of the uterus
Endometrial cancer
Endometrial hyperplasia, or a thickening of the uterine lining
Abnormal thyroid or pituitary gland function
Changes in hormone levels, such as at menopause
Changes in the contraceptives you take
Pelvic inflammatory disease or another infection
Changes in lifestyle and eating habits, stress, excessive weight gain or loss, travel, intense exercise, and surgery or recent trauma can also all contribute to the onset of menorrhagia.

For some women, even childbirth can be a cause. "Sometimes heavy bleeding occurs after a woman has had a child, or several children," says Dr. Goldstein. "Pregnancy causes the surface area of the uterus to expand, which means that after childbirth, there is twice as much surface area to shed through menstruation as before, hence the heavier bleeding than before childbirth."

Menorrhagia: When to See a Specialist

It's common for periods to vary in duration and flow, so there is no need to rush to the doctor when one cycle is heavy. Goldstein suggests monitoring your periods and visiting a specialist after three unusually heavy or prolonged cycles.

Your doctor may order certain tests to determine the specific cause of your menorrhagia, including:

A Pap test, which involves obtaining cells from the cervix during a pelvic exam
An endometrial biopsy, which involves inserting a thin instrument through the opening in the cervix and taking a small sample of the endometrial lining
A pelvic ultrasound, an imaging test that uses sound waves to take pictures of your internal organs
All of these are outpatient procedures, though some may require anesthesia. Test results are generally available within seven days.

If other medical conditions are ruled out and you still have menorrhagia, there are several options to consider. Talk to your doctor about whether any changes in lifestyle and eating habits can help reduce menstrual bleeding or if you should consider medical treatments, which have varying degrees of effectiveness and possible side effects. According to one study, oral progestogen pills are a common treatment for menorrhagia, and yet one of the least effective. Another study found it more effective to deliver hormones through an intrauterine device (IUD) that releases synthetic progestogen levonorgestrel hormone within the uterus. And a third found that using a simple over-the-counter NSAID (non-steroidal anti-inflammatory drug), such as ibuprofen and naproxen, can reduce menstrual blood loss by up to 60 percent.

A newer option with results in the same range as NSAIDs is the drug tranexamic acid, approved by the U.S. Food and Drug Administration in late 2009. The first non-hormonal medication to be given the green light for menorrhagia, it targets a protein that helps blood to clot. Tranexamic acid does have some side effects; discuss all the pros and cons with your ob-gyn.

In severe situations, you might want to ask about surgery, such as a hysterectomy to remove your uterus (after which childbearing is no longer possible). Another option is the less radical endometrial ablation, which removes the endometrial lining so that it no longer bleeds each month. This procedure may need to be repeated in order to remain effective and should not be considered if you plan to become pregnant in the future. While women typically cannot get pregnant after endometrial ablation, it is possible and poses risks for you and the baby. Both hysterectomy and endometrial ablation are serious steps that need careful consideration.

Because menorrhagia symptoms vary from woman to woman, your physician will outline one or a combination of options to effectively treat your menorrhagia and help you to get through your monthly cycle more comfortably.