Blue Tea: All You Need To Know About This Herbal Tea That May Help In Weight Loss 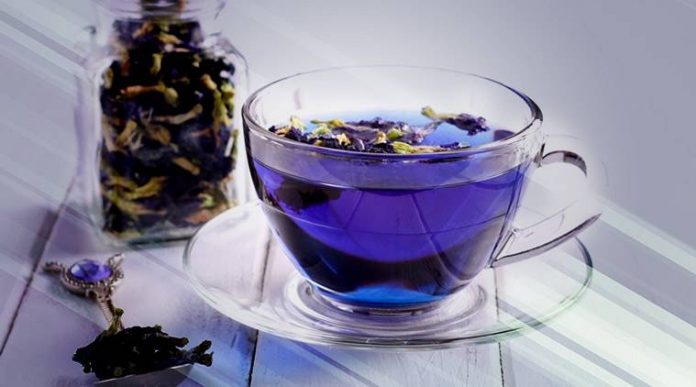 Herbal teas have a lot of takers nowadays, as more and more people come to know about the potential side effects of caffeinated drinks like regular tea and coffee. A number of herbal teas have made their mark on tea lovers across the world, including those made from flowers like chamomile and blue pea. While chamomile is very well-known for its mild and soothing flavour that acts as a stress buster, tea made from blue pea flowers is not that well known. Dried blue pea flowers yield a brew that is stunning in colour and that can be enjoyed cold or hot. Blue tea, made from blue pea flowers, also has a number of health benefits. Some people even use blue tea for weight loss, other than its antioxidant properties and its ability to fight stress.

Blue Tea - All You Need To Know
Blue tea, or butterfly pea flower tea, is a caffeine-free herbal concoction, made by seeping dried or fresh leaves of the Clitoria ternatea plant. The butterfly-pea is also known as blue pea or pigeonwings and it is a plant common to most South East Asian countries. The deep blue colour of the flower's petals has traditionally been used to make dye. The tea is popular in Thailand and Vietnam, where it is served post dinner, usually with lemon and honey added to it. Adding lemon juice to the tea changes the pH of the drink, making it change colour from deep blue to purple. Thanks to popularisation through travel blogs and shows, the blue tea leaves are now available in stores and supermarkets for purchase by tea connoisseurs around the world. The tea leaves are also used to change colour in cocktails as well.

Weight Loss And Other Benefits Of Blue Tea
Blue tea contains catechins, which are said to be instrumental in burning belly fat and aiding weight loss. Drinking butterfly-pea flowers seeped in warm water is said to be an effective way to rev up the metabolism, which in turn, makes the body burn more calories. Here are some other benefits of blue tea that you may want to know, before trying it out:

1. The tea is rich in antioxidants, which makes it a great beverage to include in your detox diet. Antioxidants protect the body against free radical action.

2. Blue tea is said to be great for the skin, due to its claimed anti-glycation effects, which fight skin ageing. The flavonoids present in blue tea may also stimulate collagen production.

3. The earthy flavour of butterfly-pea flower tea is said to be a mood enhancer. The tea is said to have stress busting effects that may also help reduce symptoms of anxiety.

4. Blue tea is said to help in losing water weight as it is a natural diuretic drink.

5. Blue tea is also said to have a role in regulating blood sugar levels, although there is not much scientific evidence to suggest that it is helpful in managing diabetes.

Some people have also claimed that blue tea is helpful in managing fatty liver diseases and reducing levels of cholesterol in blood, but there is not enough research that suggests the same. Blue tea can be a great alternative for caffeinated beverages like tea or coffee and you may consume it as such, in order to reduce your caffeine intake. The tea is now available for purchase in a number of supermarkets, grocery stores and on websites online.