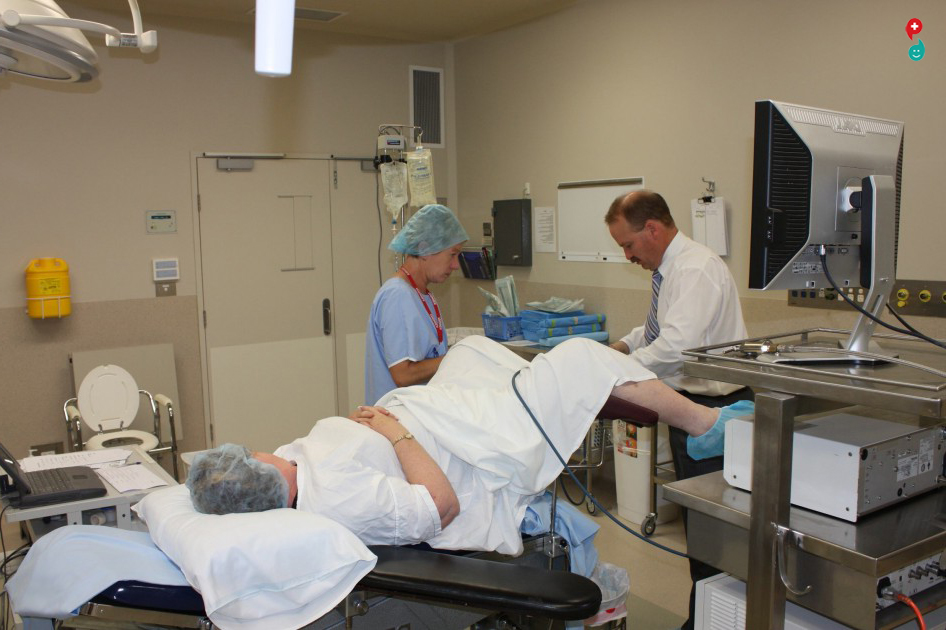 
Tests for Cervical Cancer
The first step in finding cervical cancer is often an abnormal Pap test result. This will lead to further tests which can diagnose cervical cancer.

Cervical cancer may also be suspected if you have symptoms like abnormal vaginal bleeding or pain during sex. Your primary doctor or gynecologist often can do the tests needed to diagnose pre-cancers and cancers and may also be able to treat a pre-cancer.

If there is a diagnosis of invasive cancer, your doctor should refer you to a gynecologic oncologist, a doctor who specializes in cancers of women's reproductive systems.

Tests for women with symptoms of cervical cancer or abnormal Pap results
Medical history and physical exam
First, the doctor will ask you about your personal and family medical history. This includes information related to risk factors and symptoms of cervical cancer. A complete physical exam will help evaluate your general state of health. The doctor will do a pelvic exam and may do a Pap test if one has not already been done. In addition, your lymph nodes will be felt for evidence of metastasis (cancer spread).

The Pap test is a screening test, not a diagnostic test. It cannot tell for certain if you have cervical cancer. An abnormal Pap test result may mean more testing, sometimes including tests to see if a cancer or a pre-cancer is actually present. The tests that are used include colposcopy (with biopsy), endocervical scraping, and cone biopsies.

Colposcopy
If you have certain symptoms that are suggestive of cancer or if your Pap test result shows abnormal cells, you will need to have a test called colposcopy. You will lie on the exam table as you do with a pelvic exam. A speculum will be placed in the vagina to help the doctor see the cervix. The doctor will use a colposcope to examine the cervix. The colposcope is an instrument that stays outside the body and has magnifying lenses. It lets the doctor see the surface of the cervix closely and clearly. Colposcopy itself is usually no more uncomfortable than any other speculum exam. It can be done safely even if you are pregnant. Like the Pap test, it is better not to do it during your menstrual period.

The doctor will put a weak solution of acetic acid (similar to vinegar) on your cervix to make any abnormal areas easier to see. If an abnormal area is seen, a biopsy (removal of a small piece of tissue) will be done. The tissue is sent to a lab to be looked at under a microscope. A biopsy is the best way to tell for certain if an abnormal area is a pre-cancer, a true cancer, or neither. Although the colposcopy procedure is usually not painful, the cervical biopsy can cause discomfort, cramping, bleeding, or even pain in some women.

Cervical biopsies
Several types of biopsies can be used to diagnose cervical pre-cancers and cancers. If the biopsy can completely remove all of the abnormal tissue, it might be the only treatment needed.

For this type of biopsy, first the cervix is examined with a colposcope to find the abnormal areas. Using a biopsy forceps, a small (about 1/8-inch) section of the abnormal area on the surface of the cervix is removed. The biopsy procedure may cause mild cramping, brief pain, and some slight bleeding afterward. A local anesthetic is sometimes used to numb the cervix before the biopsy.

Sometimes the transformation zone (the area at risk for HPV infection and pre-cancer) cannot be seen with the colposcope and something else must be done to check that area for cancer. This means taking a scraping of the endocervix by inserting a narrow instrument (called a curette) into the endocervical canal (the part of the cervix closest to the uterus). The curette is used to scrape the inside of the canal to remove some of the tissue, which is then sent to the laboratory for examination. After this procedure, patients may feel a cramping pain, and they may also have some light bleeding.

In this procedure, also known as conization, the doctor removes a cone-shaped piece of tissue from the cervix. The base of the cone is formed by the exocervix (outer part of the cervix), and the point or apex of the cone is from the endocervical canal. The tissue removed in the cone includes the transformation zone (the border between the exocervix and endocervix, where cervical pre-cancers and cancers are most likely to start).

A cone biopsy can also be used as a treatment to completely remove many pre-cancers and some very early cancers. Having had a cone biopsy will not prevent most women from getting pregnant, but if a large amount of tissue has been removed, women may have a higher risk of giving birth prematurely.

Loop electrosurgical procedure (LEEP, LLETZ): In this method, the tissue is removed with a thin wire loop that is heated by electricity and acts as a small knife. For this procedure, a local anesthetic is used, and it can be done in your doctor's office.
Cold knife cone biopsy: This method is done in a hospital. A surgical scalpel or a laser is used to remove the tissue instead of a heated wire. You will receive anesthesia during the operation (either a general anesthesia, where you are asleep, or a spinal or epidural anesthesia, where an injection into the area around the spinal cord makes you numb below the waist). Having any type of cone biopsy will not prevent most women from getting pregnant, but if a large amount of tissue has been removed, women may have a higher risk of giving birth prematurely.
Pre-cancerous changes in a biopsy are called cervical intraepithelial neoplasia (CIN). Sometimes the term dysplasia is used instead of CIN. CIN is graded on a scale of 1 to 3 based on how much of the cervical tissue looks abnormal when viewed under the microscope.

How biopsy results are reported

Diagnostic tests for women with cervical cancer
If a biopsy shows that cancer is present, your doctor may order certain tests to see how far the cancer has spread. Many of the tests described below are not necessary for every patient. Decisions about using these tests are based on the results of the physical exam and biopsy.

Cystoscopy, proctoscopy, and examination under anesthesia
These are most often done in women who have large tumors. They are not necessary if the cancer is caught early.

In cystoscopy a slender tube with a lens and a light is placed into the bladder through the urethra. This lets the doctor check your bladder and urethra to see if cancer is growing into these areas. Biopsy samples can be removed during cystoscopy for pathologic (microscopic) testing. Cystoscopy can be done under a local anesthetic, but some patients may need general anesthesia. Your doctor will let you know what to expect before and after the procedure.

Proctoscopy is a visual inspection of the rectum through a lighted tube to check for spread of cervical cancer into your rectum.

Your doctor may also do a pelvic exam while you are under anesthesia to find out if the cancer has spread beyond the cervix.