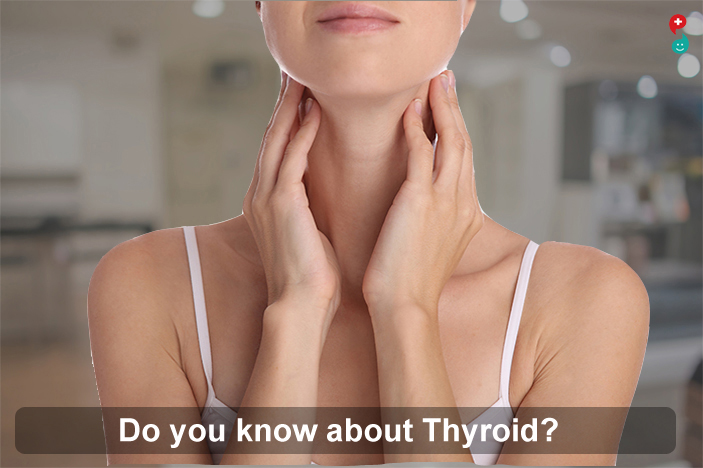 The thyroid regulates your metabolism.
The two main thyroid hormones are T3 and T4.
Thyroid disorders are common, and they include goiters, hyperthyroidism, and hypothyroidism.
The thyroid’s main role in the endocrine system is to regulate your metabolism, which is your body’s ability to break down food and convert it to energy. Food essentially fuels the body, and each of our bodies uses that fuel at different rates. This is why you often hear about some people having a “fast” metabolism and others having a “slow” metabolism.

The thyroid keeps your metabolism under control through the action of thyroid hormone, which it makes by extracting iodine from the blood and incorporating it into thyroid hormones. Thyroid cells are unique in that they are highly specialized to absorb and use iodine. Every other cell depends on the thyroid to manage its metabolism.

The pituitary gland and hypothalamus both control the thyroid. When thyroid hormone levels drop too low, the hypothalamus secretes TSH Releasing Hormone (TRH), which alerts the pituitary to produce thyroid stimulating hormone (TSH). The thyroid responds to this chain of events by producing more hormones. To learn more, read our article about how the thyroid works.

Anatomy of the Thyroid
Derived from the Greek word meaning shield, the thyroid is a butterfly-shaped gland located in front of the windpipe (called the trachea) and just below the larynx or Adam’s apple in the neck. It is comprised of two halves, known as lobes, which are attached by a band of thyroid tissue called the isthmus.

Hormones of the Thyroid
The two main hormones the thyroid produces and releases are T3 (tri-iodothyronine) and T4 (thyroxine). A thyroid that is functioning normally produces approximately 80% T4 and about 20% T3, though T3 is the stronger of the pair.

Diseases and Disorders of the Thyroid
There are many diseases and disorders associated with the thyroid. They can develop at any age and can result from a variety of causes—injury, disease, or dietary deficiency, for instance. But in most cases, they can be traced to the following problems:
Too much or too little thyroid hormone (hyperthyroidism and hypothyroidism, respectively).

Some of the Most Common Thyroid Disorders.

Goiters: A goiter is a bulge in the neck. A toxic goiter is associated with hyperthyroidism, and a non-toxic goiter, also known as a simple or endemic goiter, is caused by iodine deficiency.

Hyperthyroidism: Hyperthyroidism is caused by too much thyroid hormone. People with hyperthyroidism are often sensitive to heat, hyperactive, and eat excessively. Goiter is sometimes a side effect of hyperthyroidism. This is due to an over-stimulated thyroid and inflamed tissues, respectively.

Hypothyroidism: Hypothyroidism is a common condition characterized by too little thyroid hormone. In infants, the condition is known as cretinism. Cretinism has very serious side effects, including abnormal bone formation and mental retardation. If you have hypothyroidism as an adult, you may experience sensitivity to cold, little appetite, and overall sluggishness. Hypothyroidism often goes unnoticed, sometimes for years, before being diagnosed.

Solitary thyroid nodules: Solitary nodules, or lumps, in the thyroid are actually quite common—in fact, it’s estimated that more than half the population will have a nodule in their thyroid. The great majority of nodules are benign. Usually, a fine needle aspiration biopsy (FNA) will determine if the nodule is cancerous.

Thyroid cancer: Thyroid cancer is fairly common, though long-term survival rates are excellent. Occasionally, symptoms such as hoarseness, neck pain, and enlarged lymph nodes occur in people with thyroid cancer. Thyroid cancer can affect anyone at any age, though women and people over thirty are most likely to develop the condition.

Thyroiditis: Thyroiditis is an inflammation of the thyroid that may be associated with abnormal thyroid function (particularly hyperthyroidism). Inflammation can cause the thyroid’s cells to die, making the thyroid unable to produce enough hormones to maintain the body's normal metabolism. There are five types of thyroiditis, and the treatment is specific to each