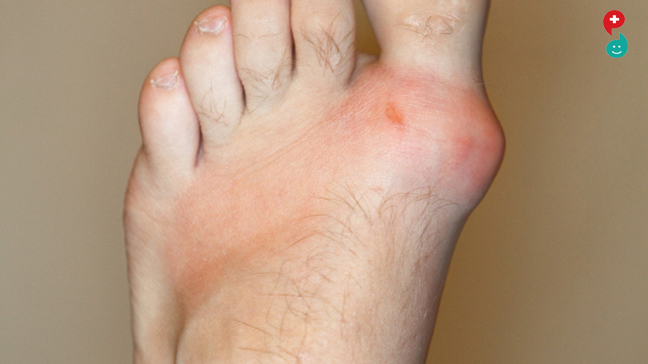 Gout is a type of arthritis in which small crystals form inside and around the joints. It causes sudden attacks of severe pain and swelling.

It's estimated that between one and two in every 100 people in the UK are affected by gout.

The condition mainly affects men over 30 and women after the menopause. Overall, gout is more common in men than women.

Gout can be extremely painful and debilitating, but treatments are available to help relieve the symptoms and prevent further attacks.
Signs and symptoms of gout

Any joint can be affected by gout, but it usually affects joints towards the ends of the limbs, such as the toes, ankles, knees and fingers.

Signs and symptoms of gout include:

Symptoms develop rapidly over a few hours and typically last three to 10 days. After this time the pain should pass and the joint should return to normal.

Almost everyone with gout will experience further attacks at some point, usually within a year.

Read more about the symptoms of gout.
When to see your GP

See your GP if you suspect you have gout and it hasn't been previously diagnosed, particularly if the pain keeps getting worse and you also have a high temperature (fever).

It's important that a diagnosis is confirmed because other conditions that require urgent treatment, such as an infected joint, can sometimes cause similar symptoms.

If you've already been diagnosed with gout and you have an attack, see your GP if any medication you've been prescribed (see below) doesn't start working within a couple of days.

Gout is caused by a build-up of a substance called uric acid in the blood.

If you produce too much uric acid or your kidneys don't filter enough out, it can build up and cause tiny sharp crystals to form in and around joints. These crystals can cause the joint to become inflamed (red and swollen) and painful.

Things that may increase your chances of getting gout include:

obesity, high blood pressure and/or diabetes
having a close relative with gout
kidney problems
eating foods that cause a build-up of uric acid, such as red meat, offal and seafood
drinking too much beer or spirits

Read more about the causes of gout.
Treatments for gout

If you have gout, treatment is available from your GP to:

relieve symptoms during an attack – this can be done using ice packs and by taking medications such as non-steroidal anti-inflammatory drugs (NSAIDs), colchicine or corticosteroids
prevent further attacks – through a combination of lifestyle changes, such as losing weight or changing your diet, and taking medication that lowers uric acid levels, such as allopurinol

With treatment, many people are able to reduce their uric acid levels sufficiently to dissolve the crystals that cause gout – and as a result have no further attacks. However, lifelong treatment is usually required.

Read more about treating gout.
Can gout cause further problems?

Sometimes gout can lead to further problems, particularly if it's left untreated.

Read more about the complications of gout.
What's pseudogout?

Pseudogout is a similar condition to gout, but usually affects the knee joint first. It's a form of arthritis that causes pain, stiffness, tenderness, redness, warmth and swelling in one or more of your joints - commonly the knee or wrist.