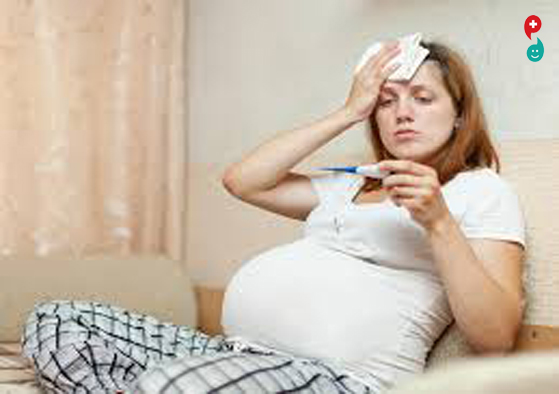 When you're pregnant, it can be hard to tell whether you're running a fever or just running a little hot. Like most expectant moms, you may be feeling flushed or extra toasty, and you may even experience the occasional hot flash, thanks to hormonal swings and your baby-to-be radiating heat as she grows.

Here's what you need to know about fevers during pregnancy — including what's considered a fever in expectant women, what medicine you can take and the importance of checking in with your doctor to minimize any potential risks that a fever might pose to you and your growing baby.

What Temperature Is Considered a Fever for Pregnant Women and What Are the Symptoms of Fever in Pregnancy?
When it comes to fever, the numbers on your thermometer indicate the severity of your symptoms. Generally, the rule is the same during pregnancy: A temperature of 100 or 101 degrees F is considered a fever. If your temperature reaches 101 degrees F, call your practitioner immediately, even if it's in the middle of the night. If you aren't experiencing any urgent cold or flu symptoms and your fever climbs to 100 degrees F, start bringing it down right away with acetaminophen (like Tylenol) and call your doctor that same day, or, if you took your temperature in the middle of the night, the next morning.

Otherwise, a low-grade fever or temp (one that's under 100 degrees F) usually isn't something to worry about when you're expecting. That said, it's also something you shouldn't ignore — so keep an eye on the thermometer to make sure the numbers don't start rising.

What Are the Causes of Fever During Pregnancy?
You can get a fever during pregnancy for the same reasons you get a fever when you're not expecting. In fact, you're probably more likely to suffer from common viral infections like the flu or colds while you're pregnant. That's because your immune system is suppressed in order to protect your fetus (which your body considers an outsider) from being rejected. Good news for your baby, not so good news for your sinuses.

Low-grade fevers may be the result of a benign viral infection like a cold, while higher fevers may be a symptom of the flu. Sometimes, a fever can be caused by a bacterial infection (like a urinary tract infection, kidney infection or strep throat, for example) that requires antibiotics. On that note, pregnant women should avoid eating raw meat, fish and unpasteurized cheese to avoid exposure to listeria bacteria during pregnancy, which can also cause a high fever.

How Long Can a Fever Last When You're Pregnant?
Fever in pregnancy can last as long as the underlying cause, such as the flu, but you should call your practitioner right away if it reaches 101 degrees F. And take steps to bring down your temperature the same day it climbs to 100 degrees F or higher.

What Can I Take for a Fever During Pregnancy?
While you're waiting to speak to your doctor, take acetaminophen (Tylenol) to reduce your fever. Avoid aspirin or ibuprofen (Advil or Motrin) when you're pregnant unless they're specifically recommended by your practitioner.

A few more tips to treat fever during pregnancy:

Take a tepid bath or shower
Drink plenty of water and other cold beverages to cool down and prevent dehydration
Keep clothing and covers light
What Can I Do to Prevent Fever During Pregnancy?
Avoid catching a cold or flu by washing your hands often, avoiding sick people and getting a flu shot. Catching the flu can not only induce fever, it can potentially lead to other complications — all the more reason to get the flu vaccine at the start of flu season (ideally in October) if you're pregnant or planning to get pregnant.

But while it's possible to get a fever any time throughout your pregnancy, a high fever in the first weeks of pregnancy may be riskier than a flu later on. A study published in the journal Pediatrics associated fever, especially in the first trimester, with various birth defects — although experts caution that the fever’s source, severity, frequency and any treatment are all factors to consider when evaluating any risk. Still, it’s a good idea to have a trusty thermometer on hand (along with your practitioner’s number) to keep a very close eye on your temperature if you're feeling under the weather.

What Effects Can a Fever Have on My Pregnancy?
It's unlikely that a fever will have an effect on your pregnancy. A mild fever under 100 degrees F is generally no cause for concern and typically won't have any impact on your growing baby. But a higher fever can be more serious, which is why it's so important to give your practitioner a call and bring your temp down with acetaminophen as soon as you start to see those numbers go up.

While pregnant women and their babies are more likely to suffer from complications from an untreated high-grade fever, it's important to know that the fever itself may not be the cause; it could be an indication of an underlying condition, such as an infection or something else.