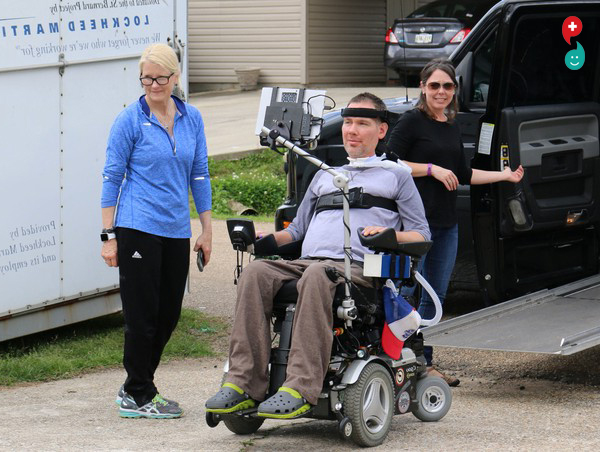 What is Amyotrophic Lateral Sclerosis (ALS)?

Amyotrophic lateral sclerosis (ALS) is a group of rare neurological diseases that mainly involve the nerve cells (neurons) responsible for controlling voluntary muscle movement. Voluntary muscles produce movements like chewing, walking, and talking. The disease is progressive, meaning the symptoms get worse over time. Currently, there is no cure for ALS and no effective treatment to halt, or reverse, the progression of the disease.

ALS belongs to a wider group of disorders known as motor neuron diseases, which are caused by gradual deterioration (degeneration) and death of motor neurons. Motor neurons are nerve cells that extend from the brain to the spinal cord and to muscles throughout the body. These motor neurons initiate and provide vital communication links between the brain and the voluntary muscles.

In ALS, both the upper motor neurons and the lower motor neurons degenerate or die, and stop sending messages to the muscles. Unable to function, the muscles gradually weaken, start to twitch (called fasciculations), and waste away (atrophy). Eventually, the brain loses its ability to initiate and control voluntary movements.

Early symptoms of ALS usually include muscle weakness or stiffness. Gradually all muscles under voluntary control are affected, and individuals lose their strength and the ability to speak, eat, move, and even breathe.

Most people with ALS die from respiratory failure, usually within 3 to 5 years from when the symptoms first appear. However, about 10 percent of people with ALS survive for 10 or more years.


Who gets ALS?
ALS is a common neuromuscular disease worldwide. It affects people of all races and ethnic backgrounds.

There are several potential risk factors for ALS including:
Age: Although the disease can strike at any age, symptoms most commonly develop between the ages of 55 and 75.

Gender: Men are slightly more likely than women to develop ALS. However, as we age the difference between men and women disappears.

Race and ethnicity: Most likely to develop the disease are Caucasians and non-Hispanics.

Some studies suggest that military veterans are about 1.5 to 2 times more likely to develop ALS. Although the reason for this is unclear, possible risk factors for veterans include exposure to lead, pesticides, and other environmental toxins.

Types of ALS
Sporadic ALS: The majority of ALS cases (90 percent or more) are considered sporadic. This means the disease seems to occur at random with no clearly associated risk factors and no family history of the disease. Although family members of people with sporadic ALS are at an increased risk for the disease, the overall risk is very low and most will not develop ALS.

Familial (Genetic) ALS: About 5 to 10 percent of all ALS cases are familial, which means that an individual inherits the disease from his or her parents. The familial form of ALS usually only requires one parent to carry the gene responsible for the disease. Mutations in more than a dozen genes have been found to cause familial ALS. About 25 to 40 percent of all familial cases (and a small percentage of sporadic cases) are caused by a defect in a gene known as “chromosome 9 open reading frame 72,” or C9ORF72. Interestingly, the same mutation can be associated with atrophy of frontal-temporal lobes of the brain causing frontal-temporal lobe dementia. Some individuals carrying this mutation may show signs of both motor neuron and dementia symptoms (ALS-FTD). Another 12 to 20 percent of familial cases result from mutations in the gene that provides instructions for the production of the enzyme copper-zinc superoxide dismutase 1 (SOD1).


What are the symptoms?
The onset of ALS can be so subtle that the symptoms are overlooked but gradually these symptoms develop into more obvious weakness or atrophy that may cause a physician to suspect ALS. Some of the early symptoms include:

For many individuals the first sign of ALS may appear in the hand or arm as they experience difficulty with simple tasks such as buttoning a shirt, writing, or turning a key in a lock. In other cases, symptoms initially affect one of the legs, and people experience awkwardness when walking or running or they notice that they are tripping or stumbling more often.

When symptoms begin in the arms or legs, it is referred to as “limb onset” ALS. Other individuals first notice speech or swallowing problems, termed “bulbar onset” ALS.

Regardless of where the symptoms first appear, muscle weakness and atrophy spread to other parts of the body as the disease progresses. Individuals may develop problems with moving, swallowing (dysphagia), speaking or forming words (dysarthria), and breathing (dyspnea).

Although the sequence of emerging symptoms and the rate of disease progression vary from person to person, eventually individuals will not be able to stand or walk, get in or out of bed on their own, or use their hands and arms.

Individuals with ALS usually have difficulty swallowing and chewing food, which makes it hard to eat normally and increases the risk of choking. They also burn calories at a faster rate than most people without ALS. Due to these factors, people with ALS tend to lose weight rapidly and can become malnourished.

Because people with ALS usually retain their ability to perform higher mental processes such as reasoning, remembering, understanding, and problem solving, they are aware of their progressive loss of function and may become anxious and depressed.

A small percentage of individuals may experience problems with language or decision-making, and there is growing evidence that some may even develop a form of dementia over time.

Individuals with ALS will have difficulty breathing as the muscles of the respiratory system weaken. They eventually lose the ability to breathe on their own and must depend on a ventilator. Affected individuals also face an increased risk of pneumonia during later stages of the disease. Besides muscle cramps that may cause discomfort, some individuals with ALS may develop painful neuropathy (nerve disease or damage).


How is ALS diagnosed?
No one test can provide a definitive diagnosis of ALS. ALS is primarily diagnosed based on detailed history of the symptoms and signs observed by a physician during physical examination along with a series of tests to rule out other mimicking diseases. However, the presence of upper and lower motor neuron symptoms strongly suggests the presence of the disease.

Physicians will review an individual’s full medical history and conduct a neurologic examination at regular intervals to assess whether symptoms such as muscle weakness, atrophy of muscles, and spasticity are getting progressively worse.

ALS symptoms in the early stages of the disease can be similar to those of a wide variety of other, more treatable diseases or disorders. Appropriate tests can exclude the possibility of other conditions.

Muscle and imaging tests
Electromyography (EMG), a special recording technique that detects electrical activity of muscle fibers, can help diagnose ALS. Another common test is a nerve conduction study (NCS), which measures electrical activity of the nerves and muscles by assessing the nerve’s ability to send a signal along the nerve or to the muscle. Specific abnormalities in the NCS and EMG may suggest, for example, that the individual has a form of peripheral neuropathy (damage to peripheral nerves outside of the brain and spinal cord) or myopathy (muscle disease) rather than ALS.

A physician may also order a magnetic resonance imaging (MRI) test, a noninvasive procedure that uses a magnetic field and radio waves to produce detailed images of the brain and spinal cord. Standard MRI scans are generally normal in people with ALS. However, they can reveal other problems that may be causing the symptoms, such as a spinal cord tumor, a herniated disk in the neck that compresses the spinal cord, syringomyelia (a cyst in the spinal cord), or cervical spondylosis (abnormal wear affecting the spine in the neck).

Laboratory tests
Based on the person’s symptoms, test results, and findings from the examination, a physician may order tests on blood and urine samples to eliminate the possibility of other diseases.

Tests for other diseases and disorders
Infectious diseases such as human immunodeficiency virus (HIV), human T-cell leukemia virus (HTLV), polio, and West Nile virus can, in some cases, cause ALS-like symptoms. Neurological disorders such as multiple sclerosis, post-polio syndrome, multifocal motor neuropathy, and spinal and bulbar muscular atrophy (Kennedy’s disease) also can mimic certain features of the disease and should be considered by physicians attempting to make a diagnosis. Fasciculations and muscle cramps also occur in benign conditions.

Because of the prognosis carried by this diagnosis and the variety of diseases or disorders that can resemble ALS in the early stages of the disease, individuals may wish to obtain a second neurological opinion.


What causes ALS?
The cause of ALS is not known, and scientists do not yet know why ALS strikes some people and not others. However, evidence from scientific studies suggests that both genetics and environment play a role in the development of ALS.

Genetics
An important step toward determining ALS risk factors was made in 1993 when scientists supported by the National Institute of Neurological Disorders and Stroke (NINDS) discovered that mutations in the SOD1 gene were associated with some cases of familial ALS. Although it is still not clear how mutations in the SOD1 gene lead to motor neuron degeneration, there is increasing evidence that the gene playing a role in producing mutant SOD1 protein can become toxic.

Since then, more than a dozen additional genetic mutations have been identified, many through NINDS-supported research, and each of these gene discoveries is providing new insights into possible mechanisms of ALS.

The discovery of certain genetic mutations involved in ALS suggests that changes in the processing of RNA molecules may lead to ALS-related motor neuron degeneration. RNA molecules are one of the major macro-molecule in the cell involved in directing the synthesis of specific proteins as well as gene regulation and activity.

Other gene mutations indicate defects in the natural process in which malfunctioning proteins are broken down and used to build new ones, known as protein recycling. Still others point to possible defects in the structure and shape of motor neurons, as well as increased susceptibility to environmental toxins. Overall, it is becoming increasingly clear that a number of cellular defects can lead to motor neuron degeneration in ALS.

In 2011 another important discovery was made when scientists found that a defect in the C9ORF72 gene is not only present in a significant subset of individuals with ALS but also in some people with a type of frontotemporal dementia (FTD). This observation provides evidence for genetic ties between these two neurodegenerative disorders. Most researchers now believe ALS and some forms of FTD are related disorders.