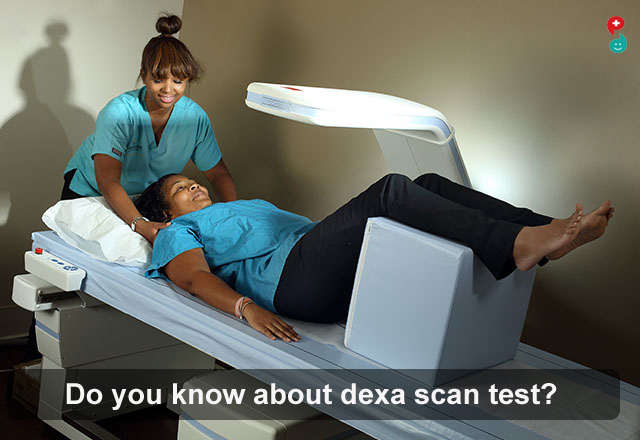 
﻿What Is a DEXA Scan?
A DEXA scan is a non-invasive test that measures bone mineral density to assess if a person is at risk of osteoporosis or fracture. DEXA stands for dual energy x-ray absorptiometry—a mouthful of a term that actually tells a lot about this procedure, in which two X-ray beams are aimed at the bones. While a regular X-ray can show changes in bone density (osteopenia) after bone loss of about 40 percent; a DEXA scan can detect changes as small as 1 percent, making it more sensitive and accurate. The DEXA is sometimes referred to as a central DEXA scan, bone densitometry scan, or a DXA scan.

Purpose of Test
A DEXA scan detects weak or brittle bones to help predict the odds of a future fracture and, sometimes, to determine if someone should be taking medication (such as a bisphosphonate) to slow bone loss. After an initial DEXA scan, subsequent scans can be done to compare the progression of bone loss—in other words, comparing a baseline scan with a second scan can show if bone density is improving, worsening, or staying the same.

A DEXA scan also can be used to assess how well osteoporosis treatment is working. And after a fracture, a DEXA scan can assess if the break was likely due to osteoporosis.

Other reasons to have a DEXA scan include:


A break or bone loss in your spine showed up in an X-ray
You have back pain that could be caused by a spine fracture
You've lost a half-inch or more of height within one year
You've had a total height loss of an inch and a half
As a screening test for bone loss, which tends to happen as a person ages, the U.S. Preventative Services Task Force, as well as the National Osteoporosis Foundation (NOF), recommend that all women age 65 and older and all men over 70 have a DEXA scan at least once. The age discrepancy is because bone loss in women is associated with the diminishment of estrogen that occurs with menopause, so women tend to develop low bone mineral density sooner than men.


Other people who often are advised to have a DEXA scan, according to the Radiological Society of North America (RSNA), include:

Women who've reached menopause and are not taking estrogen
People with a personal or maternal history of hip fracture
Smokers or people whose mothers smoked while pregnant
Post-menopausal women who are tall (over 5 feet, 7 inches) or thin (weigh less than 125 pounds)
Men with clinical conditions associated with bone loss, such as rheumatoid arthritis or chronic kidney disease
People who take medications known to cause bone loss, including corticosteroids such as prednisone (a steroid that interferes with the bone-rebuilding process), various anti-seizure medications such as Dilantin (phenytoin) and certain barbiturates, and high-dose thyroid replacement drugs
People with type 1 (juvenile or insulin-dependent) diabetes, liver disease, kidney disease, or a family history of osteoporosis
Those who have high bone turnover, which shows up as excessive collagen in urine samples
People who have a thyroid condition, such as hyperthyroidism, or a parathyroid condition, such as hyperparathyroidism
Transplant patients, who are at increased risk of osteoporosis due to anti-rejection medications they may be taking

People who've had a fracture after only mild trauma


Related Test: For older patients, a special low-dose X-ray of the spine called a lateral vertebral assessment (LVA) sometimes is done at the same time as a DEXA for older patients. It's typically recommended for seniors who've lost more than an inch of height; have unexplained back pain, or receive borderline readings in a DEXA scan.

Risks and Contraindications
By and large, a DEXA scan is a very safe test. Although it does involve exposure to radiation, which always carries a slight risk of cancer, the levels of radiation you are exposed to during a DEXA scan is about the same amount as you would encounter while on a transcontinental airline flight, or a tenth of the amount of radiation emitted during a chest X-ray.

What's more, according to the RSNA, "Modern x-ray systems have very controlled X-ray beams and dose control methods to minimize stray (scatter) radiation. This ensures that those parts of a patient's body not being imaged receive minimal radiation exposure."

All in all, the potential benefits of having a DEXA scan far outweighs the risk for most people.

The exception is women who are pregnant. If you know or even suspect there's a chance you could be pregnant, tell your doctor. It may be best to wait until after you've had your baby to do the scan.

Before the Test
The better prepared you are before you have a DEXA scan, the smoother and easier the procedure will go.

Timing: The DEXA scan itself takes only 10 to 30 minutes, depending on the part of the body being examined. However, you will want to allow more time than that, as you will probably need to fill out a few forms when you arrive for your appointment.

You'll also need a bit of time to change into a hospital gown if that's expected. Once the test is over, you do not have to wait for results from your scan: These will be interpreted by a radiologist, who will create a report and send it to your doctor.

Location: Central DEXA scans are done on an outpatient basis (you don't have to stay overnight in a hospital). Typically, they take place in the radiology department of a hospital or medical center, or a freestanding imaging center.

What to Wear: Dress in loose, comfortable clothing. Don't wear anything that has metal on it—zippers, buttons, buckles, decorative embellishments—as metal can interfere with the accuracy of the test. Leave your jewelry at home. You will have to remove it for the scan, and you may risk losing it.

You'll probably be instructed to remove all or some of your clothes and put on a gown during the exam. You may also be asked to take out removable dental appliances and remove your eyeglasses and/or hearing aid.

Food and Drink: There are no dietary restrictions before a DEXA scan. On the day of your test, you can eat as you regularly do. However, if you routinely take calcium supplements, you should stop for at least 24 hours before your exam.

Cost and Health Insurance: According to the non-profit American Bone Health, if you're a woman who's 65 or older or a man who's 70 or older, and you're on Medicare, you can have a bone density test every two years. If you have another type of health insurance, you probably will be covered for a DEXA if you have risk factors for osteoporosis or fractures, such as early menopause (younger than age 40), a prior low-impact fracture, or a disease or condition such as arthritis, lupus, or multiple sclerosis.

The out-of-pocket cost of a DEXA scan is around $125, according to ChoosingWisely.org, a non-profit patient advocacy organization affiliated with the American Board of Internal Medicine.

What to Bring: You should bring your insurance card and any paperwork, such as a prescription or referral, that your doctor provides you with.

Other Considerations: If you've recently had a barium enema or swallow or received an injection of a contrast material for a computed tomography (CT or CAT) scan or radioisotope scan, let your doctor know. You may have to postpone the DEXA scan for up to a couple of weeks.

During the Test
Over the course of your time at the hospital or imaging center, you will interact with several people, including a receptionist when you check in for your procedure, a nurse who will guide you through any clothing changes or other preparations for the scan, and the technician who will perform the scan. Here's an overview of what to expect from when you check in for your DEXA scan until the test is complete and you are free to leave.

Pre-Test: When you arrive at the hospital or medical center where your DEXA scan will take place, you will first go through the check-in protocol for that facility, including having your health insurance card copied and filling out any required forms. This may include a questionnaire from your doctor about any medical conditions you may have or medications you take that might have an impact on your bone strength.

Depending on timing, you may have to wait in a common room until you're called for your scan. At that point, you'll be taken by a nurse to a place where you can change into a hospital gown, if necessary.

You will then be asked to lie on a padded table. Below the table is an X-ray generator, and above it is an imaging device that resembles a mechanical arm. Usually, a DEXA scan focuses on two specific areas: the spine and the hip. That's because these are the sites where most fractures caused by low bone density (osteopenia) or bone loss occur. (If for some reason your hip or spine cannot be X-rayed—because you've had a hip replacement, for example—it's likely your forearm will be scanned instead.)

So that the machine can get an accurate picture of your spine, the technician will position your legs so that they're supported on a padded box. This will allow your pelvis and lower (lumbar) spine to naturally flatten out.

Throughout the Test: The technician will leave the room momentarily to activate the machine, which will send a thin, invisible beam of low-dose X-rays with two energy peaks through the bone: One peak will be absorbed by soft tissue and the other by bone. The amount of radiation absorbed by the soft tissue will be subtracted from the total to reveal total bone mineral density.

During the few seconds, the X-ray is being taken, you will need to hold very still and you may even be instructed to hold your breath to prevent the image from being blurry. This is the closest thing to discomfort you'll experience during a DEXA scan—the test itself is painless.

To scan your hip, the technician will place your foot in a device that will gently rotate your hip inward. He will then leave the room to turn on the machine. Again, you'll need to be still and perhaps hold your breath for a few seconds.

Post-Test: Once the DEXA scan is complete, you can change back into your clothes and leave.